The ability to recognise and trade them is indispensable for a price action trader. There are 3 types of triangle chart patterns and the chart below shows the differences between each very clearly:

Is A Symmetrical Triangle Bullish Or Bearish Chart Pattern?

The Symmetrical triangle chart pattern is a continuation pattern, therefore, it can be both a bullish or bearish pattern.  This means that if you see it in an uptrend expect a break to the upside and vice versa as shown.

How To Draw A Symmetrical Triangle
You will see price moving up and down but this up and down movement is converging to a single point.
You need a minimum of 2 peaks and 2 troughs to draw the two trendlines on both sides.
It will be only a matter of time before price breaks out of the pattern and either moves up or down

The best way is to confirm that the breakout actually happens with a candlestick before placing your order. What I do I is for example, say I’m watching a symmetrical triangle form in the 4hr charts and I know that soon a breakout will happen. I then switch to the 1hr chart to wait for the breakout to happen. If a 1hr candlestick has broken the triangle and closed below/above it, that’s my trade entry signal. So I will place a pending buy stop/sell stop order to catch the breakout from there. Learn more about multi-timeframe trading here.

Often I want to make sure that the 1hr candlestick closes outside of the triangle before I enter a pending buy stop or sell stop order to capture the move that happens to avoid false breakouts while the candlestick has not closed yet.

But here’s the problem with trading triangle breakouts, see chart below:

2: Trade the retest of the trendline that is broken

And ascending triangle pattern looks like this chart shown below:

And this is how a real chart looks like:

It is considered a bullish continuation pattern in an existing uptrend. So when you see this forming in an uptrend, expect a breakout to the upside.

However, it can also be a strong reversal signal (bullish) when you see it form in a downtrend.

You can use the strategies given in symmetrical triangle.

I prefer to target previous resistance levels as my take profit target.

And this is how a descending triangle looks like on a chart shown below: 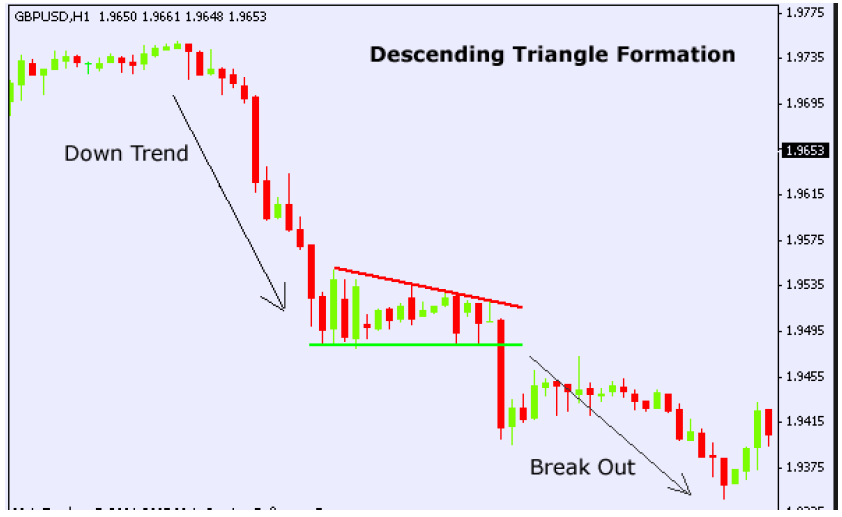 It is a bearish chart pattern that forms in a downtrend as a continuation pattern.

However, this pattern can also form as a bearish reversal pattern at the end of an uptrend.

Therefore regardless of where it forms, it’s a bearish chart pattern.

How to Trade The Descending Triangle Formation

Similar to the other 2 triangle patterns, you can either trade the initial breakout or wait to see if price reverses back to test the broken support level and then sell.

Note: with a triangular pattern, I often prefer to wait for a candlestick to breakout and close outside of the pattern before I enter a trade. This helps to reduce false breakout signals.

But there will be times when I will just trade the breakout with a pending sell stop order just a few pips under the support level to catch the breakout when it happens but when I do that, I sit and watch the close of the 1hr candlestick to make sure that it does not close above the support line (if that happens, it may mean a false breakout).

And then there’s the issues of extremely long breakout candlesticks again like this:

How To Take Profit

I prefer to use previous support levels, lows or troughs and use those as my take profit target level.

Another method of take profit that is commonly used is to measure the height of the triangle and if the height is said 100 pips then that is your take profit target. The chart here should give you a clear idea of how it’s done.

By now you should have a clear picture of what triangle patterns are and how to trade them.

Please support us and help us keep this site online by donating bitcoin. Scan to get our bitcoin wallet.

You can also copy our bitcoin wallet address below